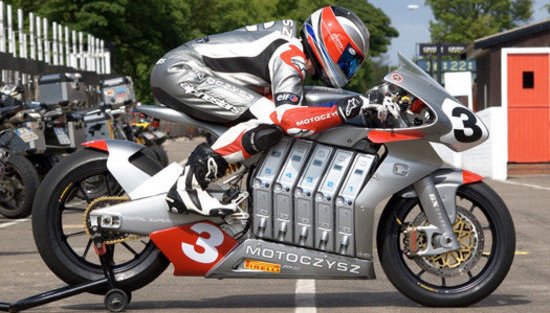 The MotoCzysz E1pc. It’s difficult to pronounce. It’s the world’s most advanced electric bike. It’s capable of speeds up to 140 mph. It packs 10 times the battery capacity of a Toyota Prius in its sleek, two-wheeled body. It just took on and won one of the world’s toughest, most dangerous races- the Isle of Man TT (electric bike race) today-with a time of 23 minutes 22.89, hitting speeds up to 135 mph. It narrowly missed out on a 10,000-euro prize for becoming the first electric bike to average 100 mph on the race course (averaged 98.973 mph). And you can get a taste of what it’s capable of in the video below.

Any questions? If so, you can read the full story of how this bike went from conception to race-ready over at Popular Science. Or just enjoy the surprisingly potent growl of the bike as it takes on the track downstairs. [via Dvice and iomtt.com]