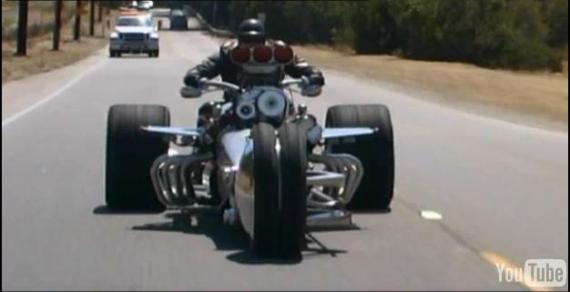 Ordinarily, trikes are tools of child’s play. Small, stable three-wheelers that provide wheeled movement for children not quite ready for more advanced vehicles. In the case of the Frogman Rocket II, however, trikes are anything but child’s play. Designed by Blastolene, this beast of a cycle is powered by a Hemi V8 engine that spits over 1,000 horses onto the three wheels.

If you have a little time to spare, don’t miss the video after the break. It’s ten minutes long, but it’s a solid ten minutes worth spending. Take a ride aboard the Frogman Rocket II with Tim Cotterill, one of the small fraction of men that actually looks bad enough to be on the driver’s seat. He pushes the speedometer well past 200 and the thing sounds like a small plane taking off. It’s pretty epic footage. And there’s also a random, leggy brunette thrown in to demonstrate the stopping power. [via AutoBlog]