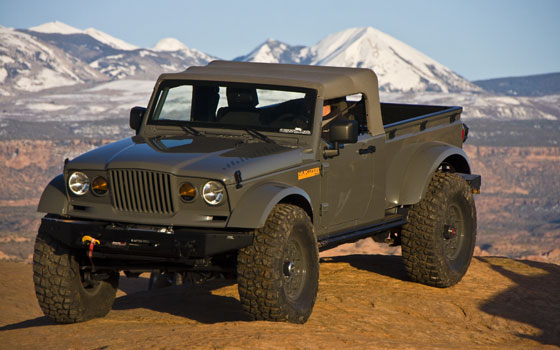 Back in the spring Jeep/Mopar brought us one of the hottest off-roaders we’ve seen in years: the NuKizer 715. After its debut, there were a lot of fans of the pickup meets jeep, and a number of whispers that Jeep might consider building it. Some recent words by none other than Sergio Marchionne indicate that Chrysler is leaning toward a production version of the NuKizer-or at least something similar.

According to Automotive News, Marchionne said of a Jeep pickup: “I would love to bring that vehicle to market.”

His words came while detailing a number of new vehicles that Chrysler has in store for the next few years, and while short of a full confirmation, they do indicate that the company is giving a long, hard look at a production Jeep pickup. And we hope that pickup looks identical (or near-identical) to the NuKizer, though we’d expect it would have to be a little less burly and military-esque. [via AutoNews]

One Response to “Jeep NuKizer 715 Headed For Production?”