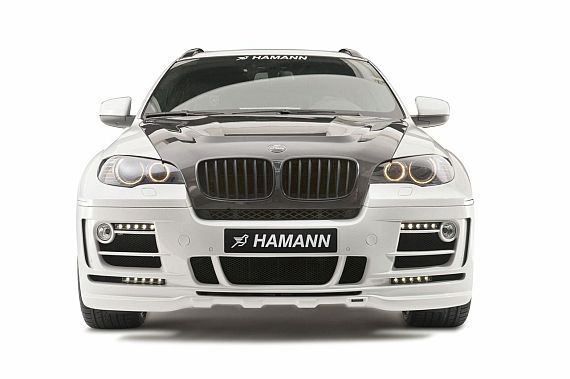 The German tuner Hamann has the perfect recipe for giving the BMW X6 a ferocious upgrade. Dubbed Hamann Tycoon EVO, this wide body kit is specially crafted for the Frankfurt Motor Show this month. The aesthetic differences are enhanced by new front wings, LED daytime running lights and side skirts that widen the vehicle by 60mm. The beast also comes with a jet-inspired exhaust system with centered double tailpipes, a roof spoiler and back wing extensions.

But other than stealing our eyes, the new Hamann Tycoon EVO also steals our heart with a new range of tweaked engines — the xDrive35i powerplant now sports 360hp and tops at 171mph, the xDrive30d engine outputs 320hp and 660Nm of torque, while the xDrive50i-based V8 churns nothing less than 500hp, 700Nm of torque and a max speed of 186mph. Count those ultra-forged and polished 23-inch wheels and it’s a certainty that you’ll fall for this one. [via WCF]